Kidney Cancer Study: Too Much Bread and Pasta? 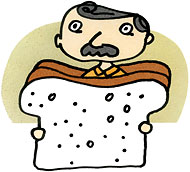 The scientists used the responses to determine the eating habits of 767 men and women with kidney cancer who had been admitted to hospitals in Italy. They compared them to 1,534 people free of the disease who were admitted for other reasons. The subjects ranged in age from 24 to 79, with an average age of 62. The report appears online in The International Journal of Cancer.

The researchers found that the one-fifth of patients who consumed the most bread — 12 ounces or more a day — were almost twice as likely to suffer from kidney cancer as those who consumed 31/2 ounces or less.

“This is only one study,” said Dr. Cristina Bosetti, a co-author of the paper and an epidemiologist at the Mario Negri Institute for Pharmacological Research in Milan, “and it has to be confirmed by other investigations.”

The authors also acknowledged that people diagnosed with cancer may recall their dietary habits differently from other people and that the interviewers knew which patients had kidney cancer and which did not.

Still, “it’s probably useful to reduce consumption of refined cereals,” Dr. Bosetti said, adding: “They tend to increase the quantities of sugar in the blood, and consequently the production of insulin, and insulin growth factors can be related to the development of cancer. But I would be quite cautious about giving advice about diet.”