70 million. That’s the number of Americans with joint issues, but that number is expected to jump even higher as Baby Boomers age. Estimates indicate that by the year 2030, 40% of American adults will have unhealthy joints.
That could mean a lot of discomfort—for joints and for pocketbooks, too. Currently, joint unhealth tops more than $128 billion a year in lost earnings and in medical care.
The truth is that our body, particularly our joints, will tell us when it’s had enough—no matter if it’s from lugging kids around or gardening in your backyard. The cause doesn’t matter so much. Your body sure feels it, though!
In order to lessen the occurrence of these joint episodes, you need to be aware of what Dale Anderson, M.D., calls your “trouble zones.” Anderson is the coordinator of the Minnesota Act Now Project in Minneapolis and the author of Muscle Pain Relief in 90 Seconds.

Walking to School Could Reduce Stress Reactivity in Children, May Curb Risk of Heart Disease

A simple morning walk to school could reduce stress reactivity in children during the school day, curbing increases in heart rate and blood pressure that can lead to cardiovascular disease later in life, according to a new University at Buffalo study.

UB researchers report in the August 2010 issue of Medicine & Science in Sports & Exercise that children who took a simulated walk to school later experienced smaller elevations in systolic blood pressure, heart rate and perceived stress while taking a short exam than children who had gotten a simulated ride to school.

Cardiovascular reactivity -- including changes in heart rate and blood pressure due to stress -- is associated with the beginnings of cardiovascular disease in children, and atherosclerosis -- the dangerous build-up of cholesterol, calcium, fat and other substances in artery walls -- in adults.

"The cardiovascular disease process begins in childhood, so if we can find some way of stopping or slowing that process, that would provide an important health benefit," says James Roemmich, UB associate professor of pediatrics and exercise and nutrition science and senior investigator on the study, which he completed with graduate students Maya Lambiase and Heather Barry. "We know that physical activity has a protective effect on the development of cardiovascular disease, and one way it may be doing so is by reducing stress reactivity."

Roemmich says because it's not known how long the protective effect of a bout of exercise lasts, parents and educators should promote active play time throughout the day.

"If it only lasts a couple of hours, then it would be most beneficial if a child walked or biked to school, then had recess during school, as well as a break at lunch, so they had opportunities for physical activity throughout the day," Roemmich says. "This would put them in a constantly protective state against stressors that they're incurring during the school day, whether that be taking an exam, trying to fit in with peers or speaking in front of classmates."

Roemmich says his study is the first to show that moderate-intensity exercise can reduce children's cardiovascular reactivity during later, stressful activities. The research builds on his earlier work, which demonstrated that higher-intensity interval exercise could afford similar protection in children.

In the more recent investigation, Roemmich and his team examined a group of 20 boys and 20 girls, all Caucasian and ages 10-14. All visited the Behavioral Medicine Research Laboratory in the morning. To simulate a ride to school, half sat in a comfortable chair and watched a 10-minute slide show of images of a suburban neighborhood, ending with an image of a suburban school. The other half performed a one-mile walk on a treadmill at a self-selected pace, wearing a book bag containing 10 percent of their body weight. As they walked, the images of the suburban neighborhood were projected onto a screen.

Following a 20-minute rest period after completing the passive and active commutes, all children took a Stroop test, which asks subjects to correctly identify the color of color names printed in the wrong color (the word "green" printed in blue ink, for instance). On average, during this activity, heart rate increased by about three beats per minute in children who walked, compared with about 11 beats per minute in children who "rode" to school. Similarly, the rise in systolic blood pressure was more than three times higher, and the change in perceived stress about twice as high, for the passive commuters.

"The perception of a stressor as a threat is the beginning of the stress reactivity process, so if you can dampen that initial perception, then you reduce the magnitude of the fight-or-flight response," Roemmich says. "This results in lower heart rate and blood pressure responses to the stressor. Exercise helped dampen even the initial response."

Chronic pain can be 'paralyzing' for women

(CNN) -- The sensation began in Melanie Thernstrom's neck the same day she went for a long swim. It flowed down through her right shoulder to her hand, as if she had a blistering sunburn underneath her skin.

Thernstrom, 32 at the time, had a couple of doctor's appointments about it, but went along with a neurologist's suggestion that it would get better on its own.

"I felt increasingly worried, but somehow not in a way that enabled me to take further action, more in a way that paralyzed me," she said. "I think of pain like one of those sea animals that attacks you by paralyzing you first."

She's now 46, the mother of 9-month-old twins, and still dealing with the pain.

Around the world, chronic pain affects a larger proportion of women than men, said Jennifer Kelly of the Atlanta Center for Behavioral Medicine in Georgia. Doctors are finding that women have more recurrent pain and more disabilities from pain than men, she said. Kelly spoke at the convention of the American Psychological Association in San Diego, California, on Thursday.

Women's chronic pain also tends to be more intense and last longer than men's, she said. Pain-causing illnesses such as fibromyalgia, rheumatoid arthritis and irritable bowel syndrome are all more common in women than men, according to the International Association for the Study of Pain.

One possible reason that women bear this burden of pain is hormones, Kelly said. The menstrual cycle can be associated with changes in discomfort among women with chronic pain.

Pain also can have long-lasting consequences that scientists are just beginning to understand. A study in the September issue of the journal PAIN found that women who suffer menstrual cramps have significant brain structure changes compared with women who don't.. Other studies have also found abnormal brain structure changes in people with disorders such as chronic back pain and irritable bowel syndrome. Scientists do not yet know what these changes mean, or if they are reversible.

A 2008 study in the Journal of Neuroscience found that people with chronic pain have neurons firing too much in certain brain regions, which could lead to permanent damage. This may explain the repeated findings in other studies that chronic pain is linked to depression.

Women tend to focus on emotional aspects of pain, worrying about how it will affect their responsibilities, whereas men focus on the sensory aspect, Kelly said. That's why it is especially important for physicians to help women challenge their negative thoughts that make the situation worse, she said.

Thernstrom, who eventually found that she suffers from overlapping arthritic conditions, agrees that many patients with chronic pain need help changing their mind set about pain. She spent a long time feeling angry and frustrated because she was looking for a "magical cure," and despaired when interventions such as physical therapy and medications did not deliver complete, quick solutions.

"Part of what helped me was switching out the model in which I had to be pain free to be happy," Thernstrom said. "Realizing I can have some pain, just like it can be raining outside and I can be happy -- it's all a matter of what level the pain is at."

Despite men and women dealing with pain differently, doctors treat them the same for conditions such as rheumatoid arthritis, said Dr. Chaim Putterman, chief of rheumatology at Montefiore Medical Center and Albert Einstein College of Medicine in the Bronx, New York.

"We may be doing our patients a disservice by doing it that way, and perhaps there are gender-specific influences that need to be taken into account that we're not taking into account," he said.

Psychological counseling for people with chronic pain can help patients reframe how they see their pain and manage the consequences in other areas of their lives, Kelly said.

Many studies have found a connection between depression and chronic pain, with mental stress exacerbating physical discomfort and vice versa. Depression screening should be part of any evaluation of a patient with chronic pain, Putterman said.

Some of the symptoms of fibromyalgia are akin to depression, and medications for the chronic pain condition also work as antidepressants, Putterman said. Cognitive behavioral therapy, which helps people change their thinking and behavior patterns, has also been shown to be effective for this condition.

But some chronic pain patients are resistant to mental health referrals and want treatment only for the pain itself, he said.

"You would prefer to have an organic disease than a mental disease because of the stigma that's associated with mental disease in many circles," he said.

In general, women are more dependent on their network of friends and family in dealing with chronic pain than men, who tend to handle issues more by themselves, Putterman said. In his experience, women tend to come to doctor's appointments with members of their family, whereas men tend to go alone.

Thernstrom's new book "The Pain Chronicles," on sale Tuesday, details her own journey through pain as well as a history of pain from ancient Babylon to the present. For her research for the book, she observed doctors consulting with hundreds of patients of chronic pain and then followed some of those patients for eight years as they struggled to overcome their constant discomfort.

Today, her pain interferes with her ability to pick up her children as much as she'd like; she wishes she could carry them around in a sling, for instance, but already she needs a baby sitter's help to take the twins around.

Seeking treatment for pain as early as possible is crucial, she said.

"Pain is like water damage to your house after the house collapses," pain specialist Dr. Daniel Carr told Thernstrom for her book. Thernstrom herself adds, "The time to fix it is when it's a drip."
Posted by CA at 2:22 pm No comments: 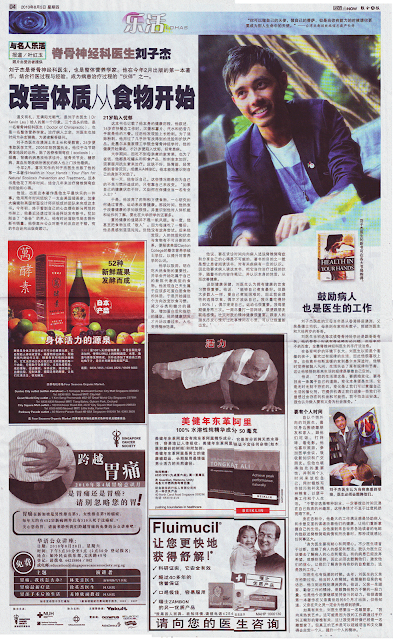