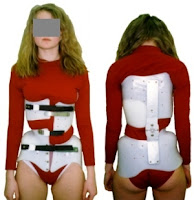 Scoliosis is not the disease or diagnosis; rather it is the term that is used to describe the abnormal curvature of spine. This condition is caused by many factors congenital, degenerative or developmental problems- though majority of the cases don’t have any apparent cause and are termed as "idiopathic" scoliosis.

Brace Treatment - Does it work?

This condition generally develops in upper back, however can be found in the low back or mid-back. The spine curvature is side to side, and is present as the double S shaped curve or single C shaped curve.

Growing kids are often treated with the back brace, but because of the skeletal maturity, adult treatments are more complicated.  Most commonly used scoliosis treatments include clear institute, schroth method, chiropractic care, bowen, yoga/pilates, medication, modality physical therapy, exercise therapy, and injections. But some of these treatments for Scoliosis are said ineffective. Around 68 patients get at least one of these treatments while fifty five patients got no treatment. The surveys demonstrated not any significant advantage based on the change in HRQOL procedures over the 2 year of period.

Conclusion
For all reader who are still not convinced I highly recommend they read this research for more information: http://drkevinlau.blogspot.com/2010/01/weak-evidence-of-benefit-for-scoliosis.html


About Dr Kevin Lau
Dr Kevin Lau DC is the founder of Health In Your Hands, a series of tools for Scoliosis prevention and treatment. The set includes his book Your Plan for Natural Scoliosis Prevention and Treatment, a companion Scoliosis Exercises for Prevention and Correction DVD and the innovative new iPhone application ScolioTrack. Dr Kevin Lau D.C. is a graduate in Doctor of Chiropractic from RMIT University in Melbourne Australia and Masters in Holistic Nutrition from Clayton College of Natural Health in USA. In 2006 I was awarded the "Best Health-care Provider Awards" by the largest Newspaper publication in Singapore on October 18 2006 as well as being interviewed on Primetime Channel News Asia as well as other TV and Radio. For more information on Dr Kevin Lau, watch his interviews or get a free sneak peek of his book, go to: http://www.hiyh.info.
Posted by Dr Kevin Lau at 12:17 am