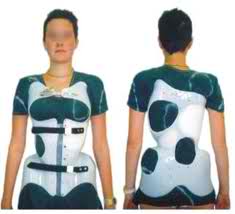 Scoliosis is known by the curvature of a person’s spine. Scoliosis can be discovered at birth, while in the womb the bones of the spine fail to form properly or the ribs fuse together leading to congenital scoliosis. The condition poses minimal risk to infants and young children of both genders.

Neuromuscular scoliosis refers to muscle problems such as poor muscle control, muscle weaknesses and muscle paralysis caused by certain diseases (spina bifida, muscular dystrophy and polio). Idiopathic scoliosis has no cause and is frequently observed in adolescents, the majority being young girls. The spinal curves worsen as adolescents grow. The braces are less helpful to overweight patients afflicted with adolescent idiopathic scoliosis.
Treatment varies according to the cause of the scoliosis, the size and location on the spine and the growth rate of the patient. For curves between 24 to 40 degrees in adolescents, body braces are one of the advised methods used by doctors to stop the advancement of spine curving. Boston Brace, Milwaukee Brace, Wilmington Brace and Charleston Brace are the different types of braces. Each brace has an individual function and the patients’ health care provider has to choose the most suitable one for the patient.
Medical reports say the scoliosis brace applies pressure at certain points to straighten the spine. The importance of the brace is that it is adjustable as the patient matures.

The standard treatment prescribed is a scoliosis brace that corrects moderate curves of 24 to 40 degrees in adolescents. This treatment is recommended despite the lack of evidence to validate its prescription. Though hard and elastic braces have been shown to correct spinal curvature, the research does not provide definite answers. More investigation is needed to determine conclusively if body bracing is good for scoliosis patients.

Recent long-term studies published in research journals cast doubt on the usefulness of the scoliosis brace treatment, especially on its supposed ability to halt the scoliosis spine progression, preventing the patient from needing scoliosis surgery or significantly altering the condition.

At the 2010 SOSORT meeting in Montreal, a speaker presented findings that demonstrated the possible negative impact scoliosis braces may have on an individual. When scoliosis braces were used on rat tails, which are structurally similar to the human spine, the rate of disc deformity increased. Moreover, the curvature of the scoliosis spine had an elevated chance of worsening.

The futility of the brace is further illustrated in a graph designed by the creators of the Scoliscore genetic test. The results of the scoliosis brace treatment and the predicted progression of Adolescent Idiopathic Scoliosis by studying pre-disposed genetic factors was plotted in two separate graphs. The two graphical lines matched almost perfectly, emphasizing that scoliosis brace is a poor treatment that doesn’t alter the course of the condition. 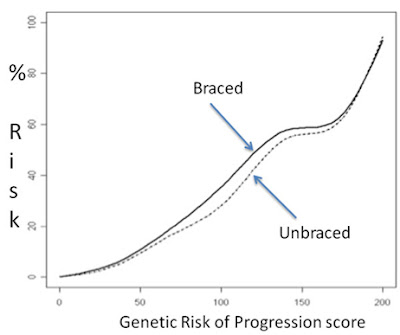 Aside from the limited probability of the braces actually working, there are other reasons for the immense aversion to wearing it. The brace is constructed to attach against the skin to firmly hold the spine in place. It has been known to cause great discomfort as well as skin problems since the plastic brace is fitted very tightly. The plastic fittings chaff the skin and are responsible for skin irritations and skin breakouts. The areas have to be given time to heal before the device can be worn again. The brace is also responsible for darkening of patches of the skin. Health care professionals advise patients to wear a cotton shirt underneath the brace, but that does very little to help.

Weather conditions further enhance the distress; given that hot or humid conditions can be very uncomfortable, patients have to take excessive measures to keep their skin cool and dry.

Scoliosis brace treatment has a rigid, demanding schedule. Patients have to wear the brace for a prescribed period of time, in the beginning it is a few hours per day. The hours will subsequently be increased to 23 hours per day. Most patients find it bothersome to remove the brace for certain activities and then to re-attach it again. The biggest issue adolescents have with the scoliosis brace, it is too noticeable. The brace is even obvious under clothing, undermining the patient’s confidence. Many patients reported feeling self-conscious and “weird” after a few weeks of wearing the brace. They began to resist the treatment, seeing it as an imposition and a very unwanted interference in their already difficult lives.

In light of these latest developments, patients should explore other options rather than expensive and invasive scoliosis braces. My book “Your Plan for Natural Scoliosis Prevention and Treatment - Health In Your Hands” tackles scoliosis at the cause by changing how the scoliosis gene is expressed. By changing a person’s diet the scoliosis sufferer can turn off the scoliosis gene and thereby halting the progression, while exercises demonstrated in the DVD “Scoliosis Exercises for Prevention and Correction” and special spinal devices detailed in the book re-train and mould the spine into its normal alignment.


About Dr Kevin Lau
Dr Kevin Lau DC is the founder of Health In Your Hands, a series of tools for Scoliosis prevention and treatment. The set includes his book Your Plan for Natural Scoliosis Prevention and Treatment, a companion Scoliosis Exercises for Prevention and Correction DVD and the innovative new iPhone application ScolioTrack. Dr Kevin Lau D.C. is a graduate in Doctor of Chiropractic from RMIT University in Melbourne Australia and Masters in Holistic Nutrition from Clayton College of Natural Health in USA. In 2006 I was awarded the "Best Health-care Provider Awards" by the largest Newspaper publication in Singapore on October 18 2006 as well as being interviewed on Primetime Channel News Asia as well as other TV and Radio. For more information on Dr Kevin Lau, watch his interviews or get a free sneak peek of his book, go to: http://www.hiyh.info.
Posted by Dr Kevin Lau at 4:07 pm

I appreciate you and I would like to read your next post.
We will help you for finding any important News that you need for
every information.
Bangladesh online news
Live bangladesh
BD News
News